I’m studying for my next Level II Certificate of Study with the Institute for Challenging Disorganization (ICD): Aging. And I’m on the Board of the National Association of Productivity and Organizing Professionals Seattle Area Chapter. We have a lending library, and I just finished a tedious project of re-indexing our offerings. And “the Great Material Continuum, the force that binds the universe together: all the worlds in the universe have too much of one thing and not enough of other things, and the Continuum, like a river that goes from ‘have’ to ‘want’ and back again,” brought something to me in return. That’s mostly a quote from Episode 156 “Faith, Treachery and the Great River of Plenty of Star Trek Deep Space Nine (one of my absolute favorite episodes). The Great River of Plenty is an element of Ferengi (a Star Trek alien species) economic theory, or religion, depending on your druthers. They are a scrupulously acquisitive bunch. 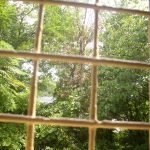 Why the nonsensical meandering in this conversation? Because what drifted to me was painful, and what I’m studying makes it poignant. NAPO Seattle has a copy of My Mother’s Garden, Cynthia Lester‘s harrowing 2008 documentary about her mother Eugenia, a person with hoarding disorder, and its ravaging effects on Cynthia, Cynthia’s brothers and Eugenia. I’d been unsuccessfully looking for a copy for months, and there the DVD was, quietly waiting for me in a cardboard box. The film begins with Cynthia and her brothers returning to their childhood home for the first time in years, after her mother is threatened with a property seizure unless the house and grounds are cleaned up. Cynthia turned to prostitution in her young teens to survive, forced out because the garbage had overtaken any space for her to sleep. Her brothers resorted to equally crushing strategies. Eugenia never left. At the start of the film, she has brought the house and property to a state in which she barricades her possessions in, entering by a window when she wants something. She sleeps outside.

This film has a happier ending. Cynthia and her brothers carry themselves past their anger at their mother to clear and salvage the house. They find appropriate professional mental health support for her and a safe, loving assisted living facility for her as shelter. At the documentary’s end, Eugenia’s hoarding disorder is under control and she has transformed purpose, wholeheartedly caring for the more disabled members of her new community. She and her children are actively engaged in reconnecting and healing each other, together.

My ICD Aging studies are more disquieting. They starkly illustrate how inadequate our medical and employment-compensation systems are for allowing our Elders to live with peaceful dignity as long as possible. Eugenia’s family faced bankruptcy trying to care for her; only the fact that they could restore the house as a rental property generated income for their expenses. They found therapeutic tools for her and themselves, but only after weeks of exhausting hunts down gnarled paths. My studies demonstrate that many families won’t have resources at all, for reasons as varied as a lack of providers in their area, to non-existent savings or lapsed insurance coverage.

I can only urge that all of us begin conversations with our Seniors, and ourselves, and our children, as quickly as possible about end-of-life considerations. I’ll add resources to my Aging page whenever possible.