October 8, 2017  – I have car. I have gear back in car. My tool kit – oh lovely lovely needle-nose pliers which pulls humongous nasty biting staples out of cardboard. Industrial light, which lights the way past Shelob in Mordor and dark basements. More room for more boxes. Always more boxes. Life is good.

October 5, 2017 – I have car. I am again playing music in car. Music = alertness and productivity.

October 5, 2017 – I have car! I have my car! My car, my drivable, cheaper gas, I don’t have to duck or hop to get into it, I know where everything goes car! Life is good when I have my car. Ulp. I think I need a week on NYC subways. Who am I and what have I done with Lauren?

October 3, 2017 – I’ve got music. I’ve got rhythm. I’ve got computer, who could ask for anything more? Thanks yet again to the extremely skillful technicians at Staples in Redmond.

October 1, 2017 7:46PM – Stubborn self-care. I’ve had to be aggressive about it this weekend. This weekend was awful. So I made myself experiment with cooking, something I love to do and find difficult to indulge for a variety of reasons. I’m reading in bed this early at night because I’m tired enough to feel a little dizzy. Didn’t do the paperwork: took a less-stressful continuing ed class instead. Please don’t read this as bragging – I’m trying to show that it’s important to find options. The simple fact that I didn’t avoid the walk to the grocery for milk (I love milk, can’t go 1/2 day without it) got me some exercise. What are your possibilities?

October 1, 2017 1:03PM – There are a 1000 unthinking things I have probably done so far in my lifetime. Letting go of the cable ties with a tab for labels – NOT ONE OF THEM. Take that, disorganization creeping in on little cat feet.

September 30, 2017 6:42PM – I just realized my last post may have made it sound as if I’ve done something illegal, immoral or similar. Not so. Just human, embarrassing, and made me feel dumber than a dead flea. I got into an accident yesterday with the Loaner Lexus which has been judged to be my fault, although I promise I didn’t see the other car. This morning, unfamiliar with Loaner V2, I locked the keys in the car. A locksmith kindly took care of that problem, and Loaner V2 promptly took revenge for the indignity by refusing to start. Engine was bucking hard enough to try to leave the bay. Had to be towed back to my car shop. But my computer is ready for pick-up. YAY!!!!! I am currently in bed, trying to feel better with a mug of mocha and a cat on my lap. I will be finishing a good book tonight, turning off my usual 6:00AM alarm for tomorrow and catching up on paperwork. Let’s see if I can stop feeling foolish.

September 30, 2017 3:27PM – More car trouble, some of it shameful enough that I don’t have the courage to admit it here. But I’ve now had to cancel four clients. Frustrating, hurts to inconvenience them by cancelling. And the productive fall-back of catching up on filing tomorrow feels selfish. Ridiculous attitude I need to readjust (wish me success!).

September 30, 2017 9:57AM – Digital refugee about to head into a library for an hour. I now own library cards for King County, Pierce County, the City of Seattle and the City of Everett. Snohomish County as soon as I’m next there. Can you tell work takes me to exotic locations?

September 28, 2017 9:16AM – Technology and I are just REALLY not getting along right now. Now my Loaner Lexus won’t start. New battery in the key this morning and everything gassed up just yesterday. On the bright side, 300 Facebook Likes!!

September 25, 2017 – And now the entire King County Library system is down. The Tech Gods are laughing at me. I am getting sooooo much reading done.

September 24, 2017 – Day 5 without a computer. My phone feels like the marvelous machine in the photo (not mine, I stumbled on it in Sumner) in comparison to the computer. I wish the truck was mine: day 51 without my RAV4. The Loaner Lexus just doesn’t make the grade. 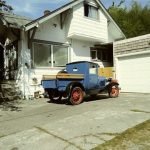 September 22, 2017 – Enforced downtime when a computer is sick = sitting in a nature preserve having a phone call with an East Coast friend. And reading books. Lots of organizing books.
September 21, 2017 – No computer? Just me, the cat, my bed and “Does This Clutter Make My Butt Look Fat?” And a mug of warm milk.
September 20, 2017 – NO MORE BLACK SCREEN OF DEATH. BALROG BE GONE. For once, it’s going to be a cheap AND improved fix.
August 14, 2017 – For the first time EVER, I forgot to bring boxes to a job. VERY embarrassing and AAAARRRGH. So glad the client had some. And the loaner Lexus does not hold as much as my beloved RAV4. Very disorienting working in a borrowed car.
August 1, 2017 – Stuck in traffic on 405, I-5 AND 167 to a client AND got rear-ended on said journey. 1.5 hours late to the poor client, who was quite gracious about it. And darned if we didn’t get some great work done. My car and I are fine. Other driver fine. Other driver’s car had a little disagreement with my bike rack…