Angeline’s Day Center, 2030 Third Avenue, Seattle, WA 98121, is a drop-in facility for homeless women, run by an all-encompassing, venerated grande dame of Seattle charities, the YWCA of Seattle/King/Snohomish. Women in need can get a shower, a meal, connections to resources for housing and jobs and more.

The first YWCA was founded in England in 1855. The first American branch followed very quickly after, NYC 1858. Seattle’s heart came to life in 1894. 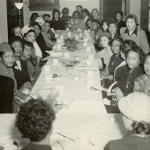 This exquisite image is on the March 7, 2019 YWCA Seattle blog post Let’s Get in Formation: 125 of YW Women

It’s been beating steadily ever since, now helping over 200 women a day at Angeline’s and in other capacities, with transitional housing, computer classes, job placement programs, social justice initiatives, and too many other services to list.

Angeline’s Day Center gladly accepts toiletries as donations. And I delight in sending clothing to the YWCA’s Dress for Success programs.