I was planning on a gleeful, goofy post about donating a trash bag stuffed to ripping with child-sized Santa Claus hats to The NOAH Center, a no-kill animal shelter in Stanwood, today. Because I did. Blasted things had lived under my bed for a YEAR, creating dust bunnies, multiplying like them for all I knew, because they were too special to just give to the Big G. I’d gotten them, leftovers from a school, from a client just scant weeks after the holiday season passed. But sometimes ya gotta do what ya gotta do. 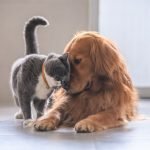 And instead, I just learned that a client’s dog was hit by a car and killed on Thursday. And now somehow helping a shelter seems provident, although the donation wasn’t dedicated to him. Another will be, to Homeward Pet in Woodinville. He was a rescue. Goodbye, F*******. You taught me to love the little guys.