I’m not entirely selfless when I do things like create my two new Casual Uncluttering webpages, one about LGBTQ resources and one about resources for Seniors, or post details about a June 1, 2019 shred event in University Place. I merrily admit I enjoy the hunt for new places, new things to do. Mossyrock, WA, population 789 (maybe) is now in my “road trip?” database. And the Duck Daze Parade in University Place sounds like just the kind of thing I would have taken my toddler son to, so I might sneak over. 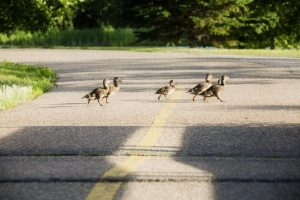 So win – win. Except that I’ve started getting calls from people who are confusing me for event sponsor, rather than event newscaster… Not even slightly sure what to do about that, except try to answer the questions.

And Make Way for Ducklings, which I’ve experienced on both NE Ames Lake Road in Redmond and some 6-lane something or other in Issaquah, still beats a parade.