This is another post from Tiffany Swedeen, Recover and Rise, which speaks to me very powerfully. I see this in some of my clients and fight it in myself. I’m reprinting From Imposter Syndrome to Radical Self Love, first published in Thrive Global on Wednesday 7/11/2018, with Tiffany’s permission.  https://www.thriveglobal.com/stories/35027-from-imposter-syndrome-to-radical-self-love 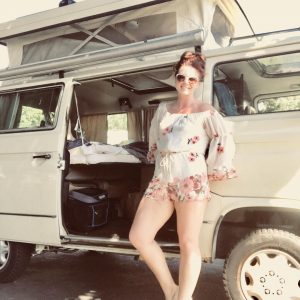 Tiffany in her van and I am SO JEALOUS!!

“Scrolling wistfully through my Instagram feed, I drooled over pictures. Mostly of single women, parked on the beach with their super-cool converted campervans, doors flung wide to show scrambled eggs or stacks of pancakes cooking on the custom stove tops. And without fail, a sweet dog lounging lazily on kitschy mountain-themed blankets covering the bench-seat-couch-bed.

“That’s who I want to be. A vangirl! A brave badass traveling around the world like there’s nothing in my way! Hair in beachy waves, sleeping under the stars. A nomad with a traveling office.”

Then flopped over on my own mountain-themed blanket, stretching across my bench-seat-couch-bed. Scratching my speckled pup’s head, I sat up to make another cup of coffee on a custom two-burner camping stove inside a sweet 4×4 VW Van.

I own the van. I have a flexible job and adventured solo on a 1,000 mile trip through the mountains last winter. I had literally just finished setting up camp after driving to an Oregon beach in a white bikini, hair flying in the breeze of the open windows, when I began to yearn for a life that others were doing “for real”.

I AM living the life I wish I was living. But that sense of not being enough, of posing my way through, was very real. The anxiety that bubbled up inside, that I’d be found out to be nothing like those “really cool” van girls, wasn’t fake at all.

Looking at my surroundings, I had to wonder: What was I doing, wasting precious moments wishing I was one of “those girls?”

Maybe they have photography skills I don’t, and maybe they’ve been a few more places I haven’t made it to YET. But there’s nothing about my life that I’m faking. So why do I feel that I am? Is it that I don’t have 50,000 followers, proving I’m living the life? Or is there something deeper and more disquieting causing me to feel like a fraud?

In my coaching business, I have clients that are plagued by this same unease. One of them, a lawyer who’s making a difference every day in the lives of families, whose vocabulary and debate skills are beyond what I can fathom, tells me she feels like she doesn’t belong in the courtroom. That she’s playing “dress-up” every day and wonders when she’ll “finally” make it.

Colleagues in a writing program with me have each, at some point, expressed the vexing thoughts “Can I really do this? Am I capable? Do I know enough?” We’ve all considered backing out or giving up due to feeling unworthy, undeserving, or unsuitable. That sooner or later our audience will discover we’ve been deceiving them all along.

The condition is common and wreaks havoc on our psyches. Most of us, men and women alike, have felt we are merely attempting to be who we someday HOPE to be. We struggle to accept the evidence in front of us; that we are whole and deserving, just as we are.

This syndrome often correlates with perfectionism, depression, anxiety, and low self-esteem. That’s true for me. Limiting beliefs that began in childhood developed an inner saboteur, a voice that declares “no matter how much you do, it will never be enough.”

Logic proves the saboteur wrong: I own the van, the dog and most days I’m living 90% of my dream (add a smoking-hot foreign boyfriend and a loaded bank account to send me traveling the world and I’ve managed the other 10%).

My vangirl-wishing was like a gift. Awareness of my disordered thinking is the first step to letting it go; to saying goodbye to the saboteur and heeding a healthier voice. A voice that speaks the language of radical self love.

Next month, I’ve got another van trip planned. Rather than gluing my eyes to my phone, pining away for photoshopped vans and expense-account trips and dogs and boyfriends that belong to someone else, I’ll be fully immersed in my reality: The one and only bona fide Tiffany. 100% real, 100% authentic, and 100% satisfied being exactly who I am.”