“… term in economics that describes and explains the practice by consumers of using goods of a higher quality or in greater quantity than might be considered necessary in practical terms….” Under Humes’ criteria, in my opinion at least, Lippincott might also be charged with fabricating planned obsolescence (forgive me, I have punned).

Intrigued, I done my usual – went on a hunt. A bit of effort found Lippincott’s 1947 Design for Business in my hands. And, as usual, there’s grey in the B & W. First, many people, and history, share the blame for modern marketing. Lippincott himself gives some credit to Henry Ford, in implementing mass production principles to a paradigm-shifting product (see below), WW II for creating unprecedented research around materials and machining, and F.W. Woolworth as Woolworth learned to exploit impulse buying. This Wed 15 Apr 2020 John Harris Guardian article, “Planned obsolescence: the outrage of our electronic waste mountain,” offers another American villain, Justus George Frederick who developed the science of market research. Adam Hadhazy‘s “Here’s the truth about the ‘planned obsolescence’ of tech’” from the 12th June 2016 BBC Future archives identifies the Phoebus Cartel, a 1920s global price-fixing scheme, as an early, profoundly influential example of corporate over-reach. I’ll use the word “partnership” to describe the group, which fixed fundamental aspects of lightbulb production among several international manufacturers to increase their sales and therefore profits. Most infuriating – these companies agreed to deliberately sabotage the lives of their products, standardizing the bulbs to last 1,000 hours.

But back to Lippincott, the man who put the Campbell Soup Company logo on Andy Warhol’s beloved red and white labels, and decided the god Mercury had to deliver flowers. My reactions to this treatise ranged from awed to incredulous, often in the span of paragraphs. Lippincott was a breathtakingly skillful artist and his book contains a luscious, sumptuous, densely-packed, meticulously curated range of images to illustrate his concepts. My favorite is a photo of the front grill of a NY Central Dreamliner – my father used to work for the NY Central. For the visuals alone, this book is priceless. 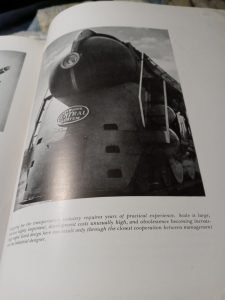 Lippincott, correctly, points out that product obsolescence is not automatically unwarranted: if an improvement to an object makes that object safer, easier to manufacture and therefore more readily distributed to a broader market, easier to transport, easier to maintain or use… there are numerous reasons why any named thing-for-sale can need remodeling. He offers an amusing example (p. 26, 3rd paragraph):

To help you wake up in the morning, the industrial designer has given thought to your alarm clock. He has tried to find a bell that will not jar you out of your sleep with a shock. He has selected colors that will fit with the average bedroom interior. He has planned the dial so that it is legible and still smart. He has designed a case that has eye appeal and yet can be manufactured in mass production within the financial means of Americans with even the smallest incomes.

All reasonable, even civic-minded. But couple it with statements like this, p. 10, 1st paragraph:

Actually, we have become so used to change that as a nation we take it for granted. The American consumer expects new and better products every year…

…I feel that the man who was truly outstanding in stimulating this new era of mass production was Henry Ford. His voluntary raising of wages, combined with research to increase production, resulted in higher wages and better living standards, first for those in the automotive industry and later for workers throughout the entire United States…. he realized that volume is the key to mass production,…. The striving of the automotive industry for higher and higher volume brought about new concepts of advertising, merchandising and mass distribution which in turn were copied by most of the other American industries…

Our custom of trading in our automobiles every year, of having a new refrigerator, vacuum cleaner or electric iron every three or four years is economically sound. Our willingness to part with something before it is completely worn out is a phenomenon noticeable in no other society in history. It is truly an American habit, and it is soundly based on our economy of abundance. It must be further nurtured even though it is contrary to one of the oldest inbred laws of humanity – the law of thrift – of providing for the unknown and often-feared day of scarcity.

The outstanding factor in such stimulation is a mass buying-psychosis. This we have always experienced during years of prosperity. The prime job that national advertising, research, and the industrial designer are doing in common is the breaking down of new sales resistance to accelerate the flow of goods and services. This is chiefly mental conditioning – largely a job of convincing the consumer that he needs a new product before his old one is worn out…

In other words, Ford paid his people better so they could buy more. Spend more. Not save. Go into debt. Accumulate garages, basements, attics and sheds of stuff. Stimulated by precise industrial design, the deliberate use of color, touch, size and other elements to manipulate buyers’ experience of and reactions to merchandise. Problematic.

There are jaw-dropping pronouncements in all this – my favorite , p. 58, 3rd paragraph:

…I think the average woman, when she is perfectly frank, will admit that she would much prefer a man to admire her for her beauty than for her intelligence. There are few women who would not choose to be described as “glamorous” rather than “intellectual.”

And even as Lippincott ruthlessly outlined the formula for inducing psychosis, he mourned the unhealthiness of American cities, in fact predicted their entire demise, fervently wished that mass production techniques would be applied to developing affordable housing and food distribution.

Design for Business, as quoted from the back cover, was “directed to the manufacturer as well as the artist and student. It does not attempt to show how to be an industrial designer, but rather how to apply art to merchandising in the broadest sense. It treats art as a tangible medium that can be understood and used to the benefit of nearly every business.”

That bias has to be accepted when someone reads this book – this was Lippincott’s portfolio. Any qualms he may have harbored, if any – doubtful that there were any – would have had to be kept to himself. And I think it’s critical to remember that WW II had ended only two years before this book came into being. There’s an almost desperate quality to his insistence that the well would never run dry.

But these concepts are not benign. This science is not neutral, not beneficent. And it has been employed for a very very long time. That’s why I’ve written this essay. The more we understand the factors underpinning our spending decisions, the more power we have to consciously take back our control over those decisions.

I’m proud to say I didn’t buy Frederick’s Introduction to Motivation Science, despite the fact that I can justify it as research into overshopping.