Kara Stewart Fortier is the founder of PlayGrounding, and will absolutely stand out in my mind as the most bravely-vulnerable and brave speaker of the entire 2021 conference. She spoke about an upbringing in an  unspecified, very restrictive religion, one which discouraged free-thinking, intuition, questions, and individuality and her wrenching struggles to find different mindsets and communities from her religious heritage, one which she’d intended to honor as a pastor in that faith, in a particular church. She intimated that her childhood caused her to suffer mental health challenges, and/or that her explorations of alternatives led her to a further crisis.  In Play We Trust – The Intersection of Spirituality and Play, her theme in conversation with Alyea Sandovar during the 2021 Playful Creative Summit, was a summary of her growth and healing. 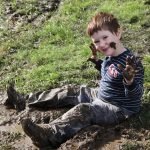 I took away so much from her sharing, I can’t capture it all. Learned about a theory called The Play Cycle, developed by Dr. Peter King, Swansea University, the late Gordon Sturrock, and the late Perry Else. The Play Cycle is a quantifiable sequence of actions/emotions which mark people’s immersion in play: understanding it can help us understand when someone is inviting us to play, when we are ready to play, and what might inspire us to play, and in playing we strengthen our creativity and sense of self. She strongly encouraged her listeners to deliberately meet new people in different communities – she went to Burning Man, which sounded like it was as different an environment as she’d ever experienced. Learned again that for me, strictly me, the wall between spirituality and organized religion is an absolute, but that I can and must look for exceptions to that rule.