Like shopping, especially around the holidays? Maybe ought not to shop – get just a little too enthusiastic? You know what I mean: no idea where the trinket will go on the tree, five oh-so-cute miniature Santa hats for the dog instead of one, $100 out of pocket instead of $10…When you find yourself in an unstoppable mood to fill the reusable bags with stuff, do what Michelle Wicks-Cypher of Travel There and Back does: Get sneaky.  Shop for a cause.

If your charity of choice has a gala, contribute an item. If your child’s school, church, office sponsors a Giving Tree, pick a family, maybe even two. Decades ago, my father persuaded his office mates to quit giving each other holiday cards and gifts, pool the money and sponsor a child instead. And you don’t have to limit this idea to a holiday: put together some back-to-school packs for those collection bins. Get some food for the animals at the shelter any month of the year – those balls of fur go through TONS of kibble. You can foster this impulse in very young people: I’ve encouraged my son to put change in the donation bins at the local zoo since he was tall enough to reach the slot. We have a tradition of donating to our favorite charity on Christmas Eve. 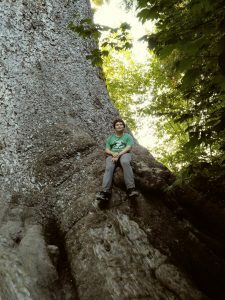 Now, Michelle gave me this brilliant idea, but I’ll admit she handed me the bare root Sitka Spruce – the big one in Olympic National Forest  (I think the photo is the Spruce, but I’m bad at trees) – and I’m planting it in the ground, refining it for this post, Professional Organizer that I am. Michelle shops for the Girl Scouts of Western Washington, an organization very dear to her – more on that in a blog to come…

So, I’m going to say, “Hey, if shopping isn’t your thing, but you overindulge on the Thin Mints (Sorry Michelle, but it can happen), dedicate that money to giving a gala gift to the troop instead.” Don’t shop, but do love bingo – OK, maybe bingo stays on the schedule, it’s social, good for laughs… But you buy a few more Lotto tickets than the budget allows? Repurpose the money to a soup kitchen. Gives reduce, reuse, recycle a whole new meaning. Maybe just pay it forward, the extra dollar in the waiter’s tip, paying for the coffee for the guy behind you, we all know those tricks. There are numerous studies which show that charitable giving, generosity make us feel good.

BUT BUT BUT show restraint. Really, truly, please budget the charitable impulse. It’s OK, nope, it’s critical to say “THIS IS WHAT I CAN AFFORD.” Give “Afford” a broad definition. How much money, but also time, can you spend on this? Treat yourself charitably, don’t harm yourself doing more than you can. Sometimes I can barely find 15 minutes to shop for food these days, let alone charity – the perils of a thriving business as a sole proprietor. So MAYBE I’ll go for 10 minutes of shopping, bundle it in with a run to an office supply store for yet more Sharpies (Organizers use a lot of Sharpies) and the office stuff will go to a school. Make charitable time an appointment on your calendar and a line item on your expense sheet if that will help you control yourself.

Or get creative with your donations of STUFF. Instead of shopping, reverse shop in your house: what would someone else like to “buy” from you? I’m proud to say the award-winning Music Program of the Henry M. Jackson High School in Mill Creek got the mail sorter featured in this post from me after I retired it earlier this 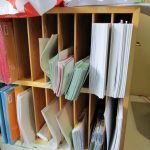 year. They got to let go of an I-gotta-say-it-was-a-mess rundown cardboard thing better suited for a home for elderly mice. The program Director was a client and that’s how I learned of their need. Serendipity! This again is a habit you can teach even young children: they often respond to an appeal of “There are children who don’t have ANY toys. You’ll be giving someone something very special.” A little bribery can go a long way: “If you’ll let go of ‘x’ number of toys, you can have one new one….” Adults can redefine bribes as “hourly wages for people too young to pay taxes.”

Giving is a lot healthier than stepping on the glass snowglobe in the hallway. And your dog just wants to eat the hats.