How Play Helps us Better Navigate Complexity – WOW. Sophia van Ruth just tossed a mind-full at me during her 2021 Playful Creative Summit talk with David Chislett. So, let’s start with an explanation of complex. According to the Complex Systems Society: “The most famous quote about Complex Systems comes from Aristotle who said that “The whole is more than the sum of its parts”.
Complex systems are systems where the collective behavior of their parts entails emergence of properties that can hardly, if not at all, be inferred from properties of the parts. Examples of complex systems include ant-hills, ants themselves, human economies, climate, nervous systems, cells and living things, including human beings, as well as modern energy or telecommunication infrastructures.” Contrast that with the online Merriam-Webster definition of complicated: “1: consisting of parts intricately combined – a complicated recipe – complicated machinery 2: difficult to analyze, understand, or explain a complicated issue – his absurdly complicated life.”

van Ruth sees the critical difference between “complex” and “complicated” as (paraphrased) “complex involves living elements, autonomy and choice are involved. The parts of a clock aren’t making choices when they revolve in the clock.” She advocates using play as a door to becoming comfortable with such uncertainty because play allows us to unlearn rigid, rational, logical thought processes as our only way to access knowledge. Improvisation is a form of play. She has some awesome ways of easing into such methods.  In particular, she offered the suggestion that people speakabout a problem in an unusual voice, like a monster or a pirate. Or bundle up some part of your problem and symbolically throw it over your shoulder “Wheee.” You distract your stuck rational brain with these delightful absurdities, and your intuition may get a word in then. 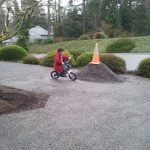 van Ruth is an InterPlay facilitator. Interplay is (from its website) “an active, creative way to unlock the wisdom of the body.” It’s based on improvisation using “movement, voice, words,
contact, and stillness.’ Another rabbit hole for us to tumble into.