I chased Tuesday’s meteors for hours. Southern Delta Aquariids and Alpha Capricornids beckoned, at their most flamboyant 7-28 -29, and my schedule let me venture forth on an increasingly demanding whim. I set out around 8PM, heading to Skykomish, elevation 928 feet in the Cascade Mountains. I got very close, the sun starting to set, even as I realized that driving back in pre-dawn shadows would be entirely unwise. Turned around and headed to Carnation with an inconsequential 82 foot elevation and nonetheless exhilarating clear skies – farm and park country in the bottom of the Snoqualmie Valley of the Cascade Mountains. Except I couldn’t get anywhere near my destination – sunk by sinkhole repairs.

Everyone who knows me knows I’m stubborn. Off to a convenient next possibility. Cottage Lake Park. Kinda light-polluted for my needs, but worth a chance. Until the imminent prospect of getting locked in forced me out. Headlong and headstrong to Redmond’s Perrigo Park, which used to be a favorite of my son’s elementary school crowd. Thwarted again, another spectre of sleeping in the car after getting gated in. One more vain attempt, park undisclosed to protect my identity and I finally went home, around midnight. Spontaneity sputtered out and not a glimpse of fire in the sky.

I find mountains calming. Cottage Lake is always an elegant lady. There was an owl at Perrigo, and I hope it’s the same one my son and I would hear when he was eight. I did see a bounty of stars. 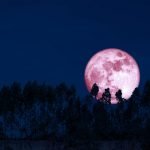 I chased the June strawberry moon and found it in exactly the opposite direction of expectations as I drove.

Ralph Waldo Emerson, in his collection of essays The Conduct of Life wrote “Shallow men believe in luck or in circumstance. Strong men believe in cause and effect.” In a parallel theme, maybe we have to let go of hope sometimes. Because then we don’t lose it, we release it until it’s ready to come back to us. And we can let ourselves have what we are given instead of what we chase.

But I may rent a mountain cabin next year. And there are eight more meteor showers this year…