This makes me sad. I posted this article on Tuesday April 25, 2017 about a marvelous old bridge:

“This steel-truss bridge, at peace in a grassy field in Edgewood, WA was something I passed for several months on my way to and from a client. It has a venerable history, having been built in 1925 and only decommissioned in 2013 and brought to land in 2015. The Washington State Department of Transportation hopes to do right by this magnificent structure – the agency is trying to sell it whole. Reduce, reuse and recycle at its finest. I’d love to have it in a garden. 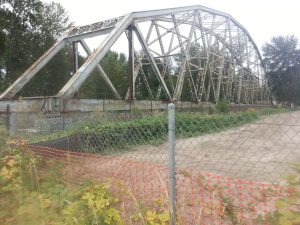 And now today, Tuesday December 27, 2022, when I’ve spent the day doing some routine maintenance on my website while stuck on the East Coast after my flight was cancelled to get back home after the holidays. And noticed a broken link to the Washington State Department of Transportation page which had advertised the bridge for sale.

WSDOT offered $1M for Puyallup bridge; no one wanted it