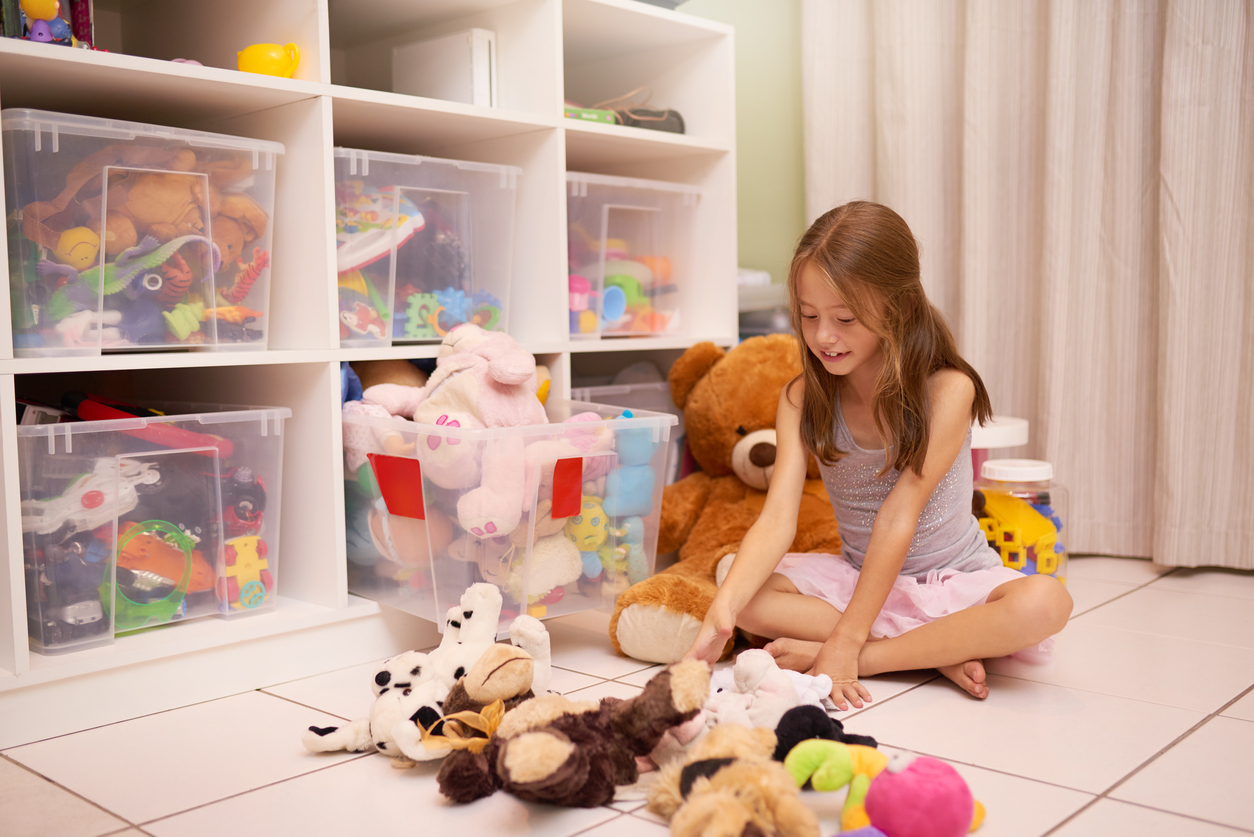 Tips for Staying Organized with Kids  This advice is probably universal among my colleagues and I. I was just glad to contribute to this GoodCall blog. I’m reprinting it here with permission. I’m even more glad I got permission when I did – four days in Ocean Shores, WA on a bit of vacation is great, except when you unwittingly land in a time-warped, Bermuda Triangle-situated hotel which doesn’t have WiFi in every room – IN THIS DAY AND AGE?!?!?!! I’m just now limping to the starting line to catch up! So this is a quick and easy post…

There are few things more satisfying than walking into a freshly cleaned room. Everything in its place. Tracks in the carpet from the vacuum cleaner. The slight smell of cleaning solution. C’mon ­– you know you like it, too.

Which is why it’s so frustrating when you instead walk into a room where the floor is covered with toys, the sofa has a growing collection of stale Cheerios, and there’s just no explanation for why the cat is trapped under a laundry basket – and said laundry is now on the floor next to it.

But, that’s life with kids, right? So, you sigh and start shuffling around the room, straightening and cleaning until there’s some semblance of order again.

We’re here with some organizing experts to tell you: It doesn’t have to be this way.

Yes, you read that correctly. There’s a better way. Let’s look at some ways to stay organized when you have kids.

Keep yourself organized with kids

If you’re struggling to keep the whole house clean or dealing with chaos and panic in the mornings, it’s time to retrain yourself.

Lucy Norman, of End to End Tenancy Cleaning in London, says taking the time to plan is the best way to get organized.

“Take a few minutes to review your schedule for the next day,” she says. “Looking over your primary tasks will definitely make the next day less stressful and overwhelming.”

That also includes prepping for the morning. Taking care of routine tasks at night, such as picking out your clothes, packing lunches, and checking kids’ backpacks, can help reduce chaos in the morning.

This can be especially helpful if you’re one of those groggy-before-coffee types who might overlook important details early in the day.

Norman also suggests setting a routine for short bursts of cleaning to help reduce the overall amount of time spent on tidying your house.

“Spending 15 minutes every day for a quick cleaning and organizing will definitely reduce the clutter and save you later efforts for deep cleaning,” she says. “For example, a regular sweep will prevent the dirt turning into a grime, which will save you a lot of mopping time and scrubbing efforts.”

If your children feel like they have a place in the room, they’ll be less likely to drag their things all across the room.

Annie Draddy agrees. Draddy is an organizer and co-founder of Henry & Higby, an organizing firm in New York.

For example, she says, set aside a spot in the kitchen to store their lunch boxes, water bottles, and some snacks. Make sure it’s easy to reach, and teach them to put items back when they’re done.

“Giving them access to these items now will help teach them a little independence and give you a bit of a break,” Draddy says.

Laura Souders, of Healthier Spaces Organizing, is an organizer who used to be an elementary teacher. She suggests creating a backpack station is one way to teach organization and responsibility.

“When organizing kids’ things in a home, I make a staging area where their book bags will land when they come home,” Souders says. “Parents help them to sort papers into keepsakes, ones for parents to keep (schedules, book orders, newsletters), and things that need to be returned [to school].”

Teach them your ways

And, yes, this means you are also going to have to keep your things organized, too.

Lauren Williams, owner of Casual Uncluttering LLC, in Woodinville, Wash., says one way to train your child to be responsible for clean-up is to involve them in the process from the beginning – as in, when you’re setting up the room in the first place.

Buy several colors of baskets or bins, and then let your child determine which toys belong in which bins. This is good for a couple of reasons.

One, you’re really engraining the idea that two things go together – the stuffed animals belong in that bin.

But perhaps more importantly, you’re allowing the kids to make associations that make sense for them. You might believe that all the trucks belong in one basket, while the stuffed animals belong in another. But if your son likes to make his favorite bear ride in his toy fire truck, he probably thinks they should be stored together. (Bonus: maybe he won’t drag out ALL the trucks if they aren’t all in the same bin.)

“In other words,” Williams says, “allowing them to develop the systems allows them to develop systems which are going to work for them, and they will be able to use those systems successfully.”

And, lastly, our favorite tip, from Williams:

“Don’t just yell ‘Go clean!’ Go in with them the first few times, lead by example, talk them through it, help them pace themselves, help them test the systems.”