I had the ultimate bonne chance to meet Victor, Victor Janusz Band, at a Greater Seattle Business Association mixer. My parents love music. I would struggle to remember all the Broadway musicals I’ve seen; I have fond memories of watching my father conduct classical in front of our stereo; I’ve seen the Modern Jazz Quartet, Sarah Vaughn and Spyro Gyra live. That’s just a start to the insufferably obnoxious amount of bragging I could achieve.

Victor and I had a lively chat about the value of a musical education, where he plays, all sorts of subjects. When he spontaneously handed me his latest, fourth album, Cafe Pluvieux, 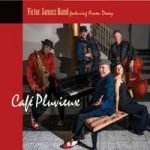 I was humbled (WOW, A REAL LIVE STAR GAVE ME HIS CD) and impatient to listen – popped it in to my car as soon as I headed home. This album is anything but routine! I’m struck by the band’s unusual selections – for once, no Gershwin, no Sondheim, no Lerner and Loewe. Nonetheless, the band’s choices were woven together to tell a story and set a mood, which is always a fascinating perspective for performers to give their listeners. And Victor’s ensemble is pleasurably versatile – they are obviously tightly-knit, and very comfortable with each other, fluidly playing with a very intimate sound one offering, then evoking a much “larger” big-band sound with ease. It’s a fantastic production.

I’ve previously posted about music here on my website. Add Victor to your mix.