In less affluent times, “My kids may want it someday” was prudent. Humans didn’t have easy access to raw materials, production facilities or transportation for millennia. We couldn’t be wasteful if we wanted to! Hope chests for a bride-to-be are a defining example of the thought – they are usually filled with clothes, linens, maybe some tableware long before the girl in question is of marrying age. The merchant who brought spices to your town might only come by twice a year. Ice needed to float down rivers. Commissioning a portrait, having a photo taken, were time-consuming, rare, expensive, often inaccessible opportunities.

Planned obsolescence, a deliberate manufacturing policy of making items which will cease to function before necessary, was unknown before General Motors started making yearly changes to its cars (at least according to the Wikipedia article I’m citing) just to beat out Ford. Invasive, planned obsolescence became insidious – a facet of covert consumerism.  And infuriatingly, it was first(?) proposed by someone who had no formal education in economics, manufacturing or any other discipline which might have been a basis for his opinions (Bernard London).

I hear “my kids may want it” about  Great-Great-Great Grandma’s desk. Towels. Pots and pans. Porcelain figurines. Elementary school projects.  Photos of a son’s ex-girlfriend – they broke up 15 years ago. In that context, I sometimes need to lead my clients to the admission that they are keeping the stuff for themselves: it’s not the kids romanticizing the possessions, but the parents projecting their own values. There are OF COURSE exceptions. Objects do have intrinsic and/or practical value. 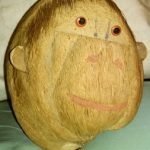 Coco. Yes, my son has already claimed him.

But our oldest generations need to know that our youngest generations are finally re-examining aggressive consumerism for its harmful effects on our environment and our psyches.

THE KIDS DON’T WANT THE STUFF.

My thanks to Jennifer L. King at Three60 Law Group PLLC for pointing me to  Your Top 10 Objects Your Kids Don’t Want by Elizabeth Stewart in Forbes Next Avenue column March 3, 2018 8:00AM. Kindly, Ms. Stewart does offer solutions for letting go of the offenders on her list. Top of stack: books – which cuts me to the quick. But I recently let go of 90% of my collections – cook books, mysteries, gardening, history of science…