It’s bad for me to be bored in a library. I will unfailingly wander to the “For Sale” racks and I WILL find something. This time it was A Pint of Murder, written by Charlotte MacLeod under the pen name Alisa Craig and published in 1980. I vaguely remembered the name Charlotte MacLeod – turns out she wrote one of my all-time favorite mysteries, The Curse of the Giant Hogweed – I ought to have recognized the name instantly – so I took a chance. Especially for $1 and a good cause!

This isn’t a review of A Pint of Murder. This is a series of selected quotes, loosely attributed, to make a point.

p. 21 “Mrs. Druffitt had been complaining for years that one had to keep wearing one’s old clothes because one simply couldn’t find anything fit to buy any more. It was generally agreed that Elizabeth Druffitt could find more excuses for not parting with a dollar than any other woman in Canada.”

p. 62 … “If I was at Miz Druffitt’s now, I’d be lucky to get a fried-egg samwitch, an’ she’d be countin’ how many grains o’ sugar I put in my tea…. Dot rambled on. ‘Miz Treadwell, now, she’d give you all you was o’ mind to eat, such as it was. But Miz Druffitt, boy, I can tell you an ant would starve to death in that woman’s garbage can. She’s got stuff in that house from the year 1, boxes piled high in the attic right to the eaves, and closets full o’ clothes she must o bought thirty years ago, just hanging there.'”

p. 122 (my note – “she” is Elizabeth Druffiit) “She don’t generally show her feelin’s much unless I happen to break somethin'”

p. 176 (my note – this is in response to Elizabeth Druffitt’s claim that she gave away an old pair of wearable shoes) “‘No you didn’t, Mama,’ said Gilly stonily. ‘You bought them new a year ago last Easter. You’d never in a million years buy another pair of shoes until the old ones were past fixing.'” Gilly goes on to describe a fight Druffitt manufactured with a relative so that Druffitt could keep some household items the relative had once loaned her. 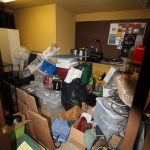 I finished this little cozy of a murder mystery, was in bed, 3/4 asleep, and realized Elizabeth Druffitt might have had hoarding disorder. In 1980, nobody would have realized what that was: Charlotte MacLeod may have entirely invented a collection of eccentric habits to create a memorable character, or she may have drawn on real life. Either way, there was no diagnosis, no support structures, no therapy. People with hoarding disorder were given one option, if they were discovered at all: “Clear up or clear out.” Horrifically memorable cases made the news every once in a while – the Collyer Brothers in the early 1900s, The Beales in 1975 – but dedicated research into the phenomena only began in the 1990s. Finally, in the 2,000s, more humane, coordinated and SUCCESSFUL approaches to hoarding disorder are being used to treat and help the people who suffer from an illness now recognized in the DSM-5 (Diagnostic and Statistical Manual of Mental Disorders, 5th Edition).

One leader in the fight to reduce harm is Jesse Edsell-Vetter. Please please read about his story in “Where the TV shows get it wrong on hoarding,” an incredibly accurate and compassionate November 01, 2016 article by Scott Helman in the Boston Globe‘s Sunday magazine.